Rangitaiki Station: Does money spent on expensive genetics pay off 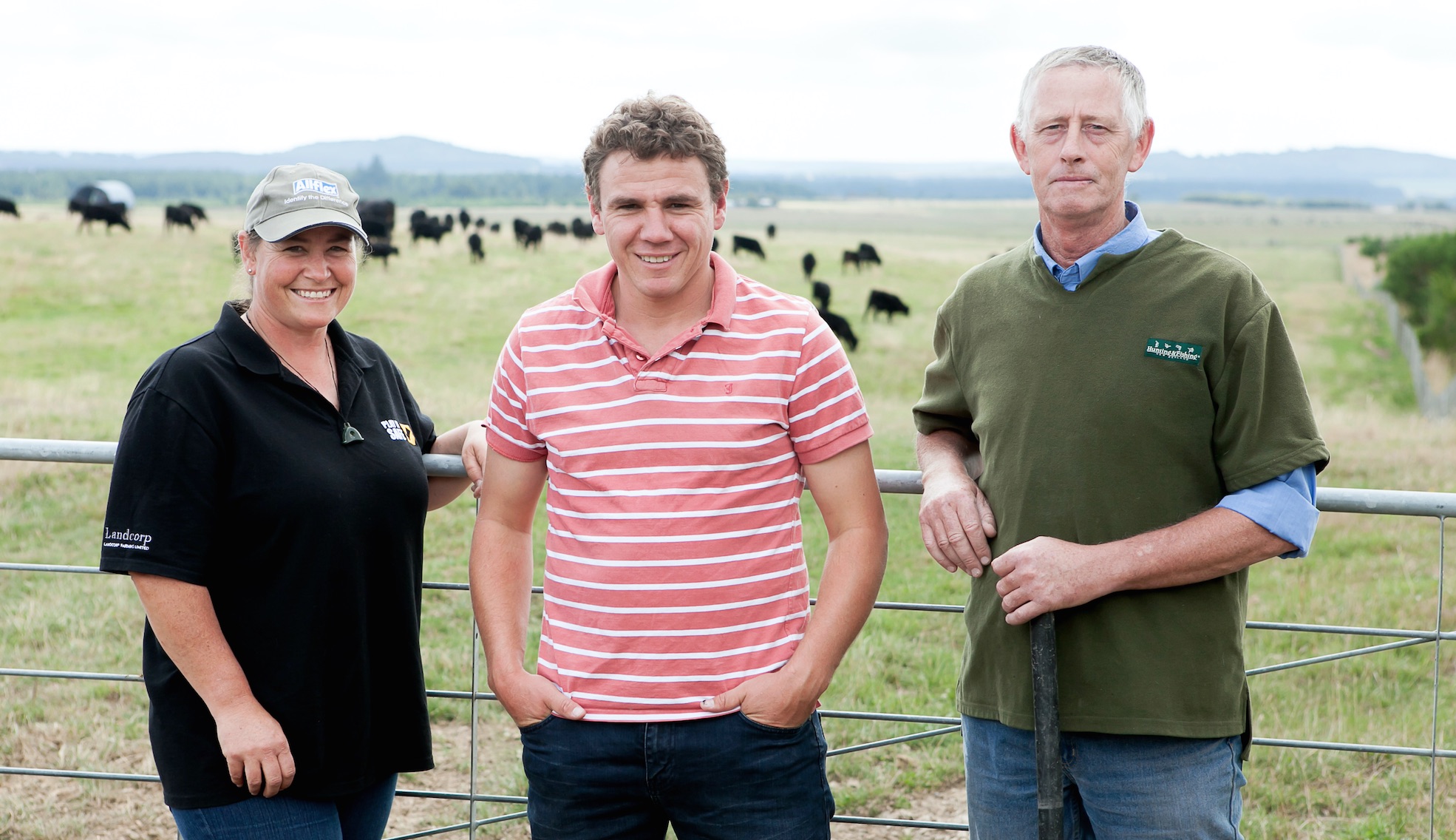 Rangitaiki employs 20 staff and is home to New Zealand’s largest deer herd – 8000 breeding hinds and their progeny. There are 22,000 Romney ewes and 6,500 replacement hoggets. Both sheep and deer young stock are generally finished on the property.

The cow herd is 1400 head of Angus mixed-age cows and 380 rising-one-year-old heifers. Up to 1000 steers are finished as two-year-olds, at a target carcase weight of 310 kilograms. Steer numbers are made up of the homebred males with additional steers bought in, as the season dictates. Up to 300 bulls are also bought in annually for finishing.

Manager Sam Bunny (pictured middle, with the station’s finishing cattle stock manager Tracy Gage-Brown and sheep/beef manager Kevin Stewart) says the property’s beef policy is pretty settled and the only significant change is a reduction in cow numbers – from more than 2000 seven years ago. The slack has been taken up by 1500 contract-grazed dairy heifers, which arrive as 100 kilograms weaners and leave 18 months later as rising two year olds.

“Overall, we run a high-cost operation, with an imbalance of high-priority stock that make more money, versus stock that can live off rubbish. The climate dictates our pasture growth curve and we need to manipulate the curve with supplements and cropping due to our winter deficit. We need high ME feed – and a lot of it – all time.”

So, when it came to cow numbers, management looked at the minimum number the property could get away with, to ensure feed quality, therefore freeing up stock units for more profitable options.

The cow’s calving date is relatively late – 25 October – reflecting the reality of farming in the North Island’s Central Plateau. The 380 replacement heifers are selected based on weaning weight, with the remainder sold store. Both heifers and cows are mated to Angus bulls.

As a Landcorp property, bulls come from Focus Genetics. In the case of Rangitaiki, the bulls are sent from Rotamahana Station near Reporoa. Sam requests bulls that will leave cows of medium frame and also has an emphasis on calving ease. “I’m looking for a bull that bends the genetic curve a little bit. I want a low mature weight and high growth rates.”

The B+LNZ Genetics Beef Progeny Test involves artificially inseminating (AI) 400 of the cows and all 380 heifers on Rangitaiki Station in the 2014/15 and again in the 2015/16 season.

While Sam is overseeing the project, the day-to-day logistics are being managed by Kevin and Tracy.

Both the cows and heifers are DNA recorded before being inseminated with both internationally-sourced semen, as well as New Zealand semen. At Rangitaiki, a range of Angus bulls are being used, in line with the station’s breeding cow policy. In addition – with the large number of cows and heifers available – some were mated to Hereford and Stabiliser bulls, as alternative maternal breeds, and some cows were mated to Simmental bulls, as a terminal sire option. Using a range of breeds will provide an interesting comparison on the value of these genetics in commercial beef production.

All progeny are then tracked, with their parentage verified. Steers and cull heifers will be assessed on their carcase traits, while replacement heifers will be tracked for their maternal characteristics.

Sam is interested in the project because he has reservations around the value of expensive bulls.

“With calving percentage limited by the fact a cow generally only has one calf, you’re really only looking at growth and cow efficiency, and may be yield.

“Sires costs in commercial operations are quite expensive for beef. You normally mate cows at a rate of one bull to 40 cows. If you have a 95% in-calf rate and a 90% calving, that might be only 30 to 35 live calves annually. Assuming a bull is used for four or five years, the sire cost per calf is quite different for a $3000 bull, compared to a $10,000 bull. I’m interested to see the value genetic performance makes to offset that cost.

“So, while I’m a great believer in buying good rams, I’m less convinced about bulls, because of that per-calf cost.

“From this test, I want to know whether more money spent on decent genetics pays off. Also – long term – observing whether the heifer replacements coming through make a difference.”

The use of AI for the project is something Sam is observing with interest. “If we could get more calves out of bulls through AI – from our own bulls or outside genetics – that changes the equation.”