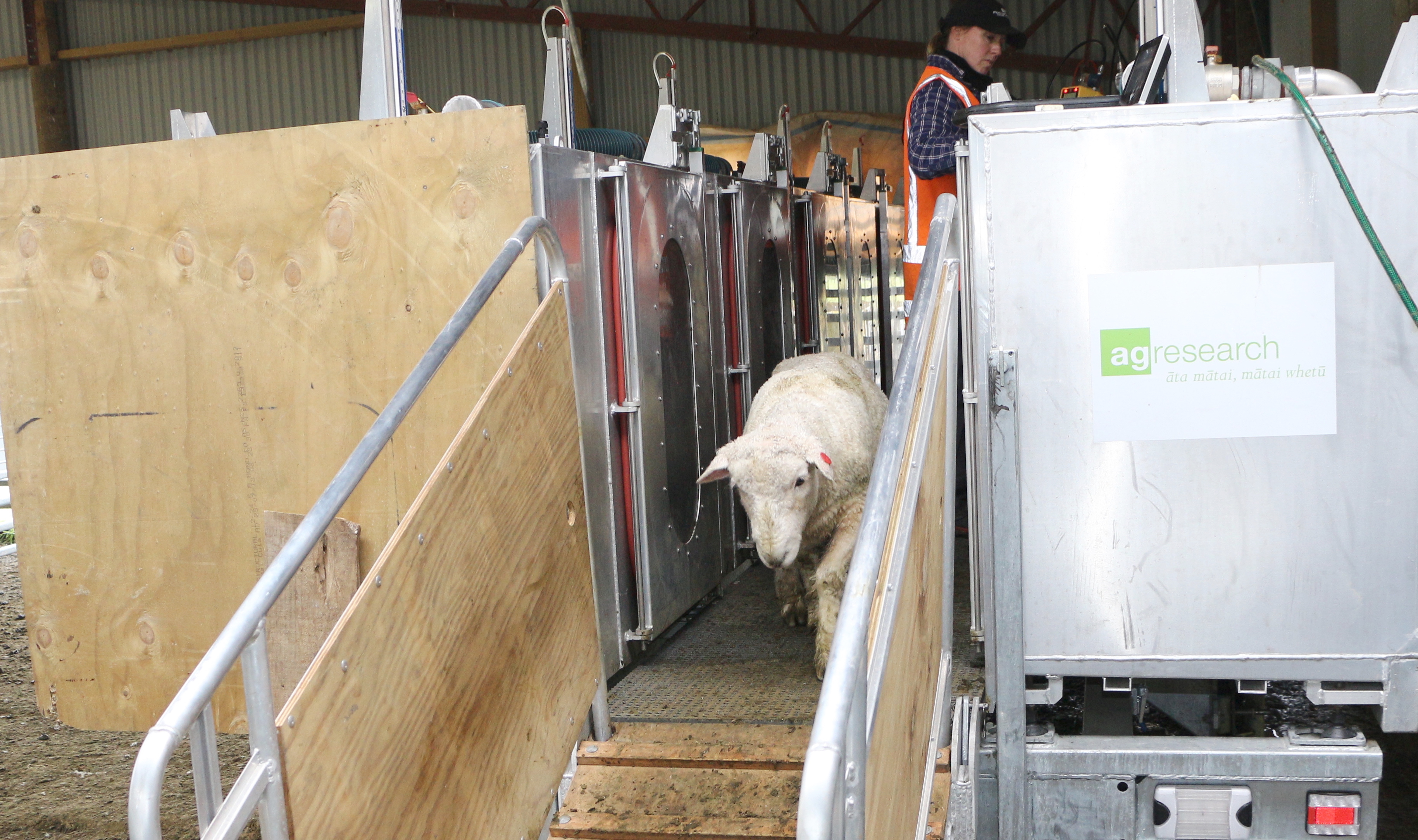 The launching of this significant breeding tool is thanks to a 10-year multi-million dollar collaboration between the Pastoral Greenhouse Gas Research Consortium (PGGRC), New Zealand Agricultural Greenhouse Gas Research Centre (NZAGRC) and AgResearch, supported by the Ministry of Business, Innovation and Employment and Ministry for Primary Industries.

Ram breeders wanting to pursue the methane breeding value will need to measure a portion of their flock using Portable Accumulation Chambers. These chambers are onboard an AgResearch-operated trailer, which travels to individual farms. Sheep spend 50 minutes in the chambers, where their gas emissions are measured. This happens twice, at a 14-day interval. The resulting information is then used alongside other genetic information to calculate the methane breeding value.

“I’ve undertaken the Methane BV measurements because I believe an animal that is healthy and doing well should produce less methane and I wanted to test that. I don’t know if that’s the case yet, but either way breeding for less methane complements what we are working to achieve on our stud. That is, more robust rams that require less inputs and make less demand on the environment.”

Mr Proffit says his commercial farmer clients have already expressed interest in the Methane breeding value. “Farmers are more interested that I anticipated. They are thinking about this issue and looking for ways to make progress.”

Interested farmers will have access to rams within two years – the time it will take to breed and grow rams on a commercial scale.

PGGRC general manager Mark Aspin says the new breeding value takes advantage of the fact individual sheep vary in their levels of methane emission and these differences are passed on to the next generation.

“This is a global first for any species of livestock. Launching the methane breeding value gives New Zealand’s sheep sector a practical tool to help lower our agricultural greenhouse gases. This is significant. Up until now, the only option available to farmers wanting to lower their greenhouse gas emissions has been to constantly improve their overall farming efficiency.

“This takes us a step further – towards actually lowering sheep methane emissions, in keeping with the sector’s commitment to work towards reducing its greenhouse emissions.”

Although progress via breeding can be slow – around 1 per cent per year, assuming a breeder was selecting only for methane – it is cumulative and has no negative impact on productivity.

Mr Aspin says it is important to note that the biggest influence on methane emissions is the amount of feed an animal eats. “To that end, the consortium is working on another three technologies, with a focus on reducing the amount of methane generated by feed. So, by breeding sheep that produce less methane per mouthful eaten – as other methane-reducing technologies come on stream – the influence of these sheep on the national flock’s methane production becomes compounding.”

The PGGRC was established 16 years ago to provide the knowledge and tools New Zealand farmers would need to mitigate greenhouse gas emissions. It is funded by eight New Zealand agricultural sector partners, via a 50:50 partnership with the Ministry of Business Innovation and Employment (MBIE) and works in collaboration with the New Zealand Government through the NZAGRC.